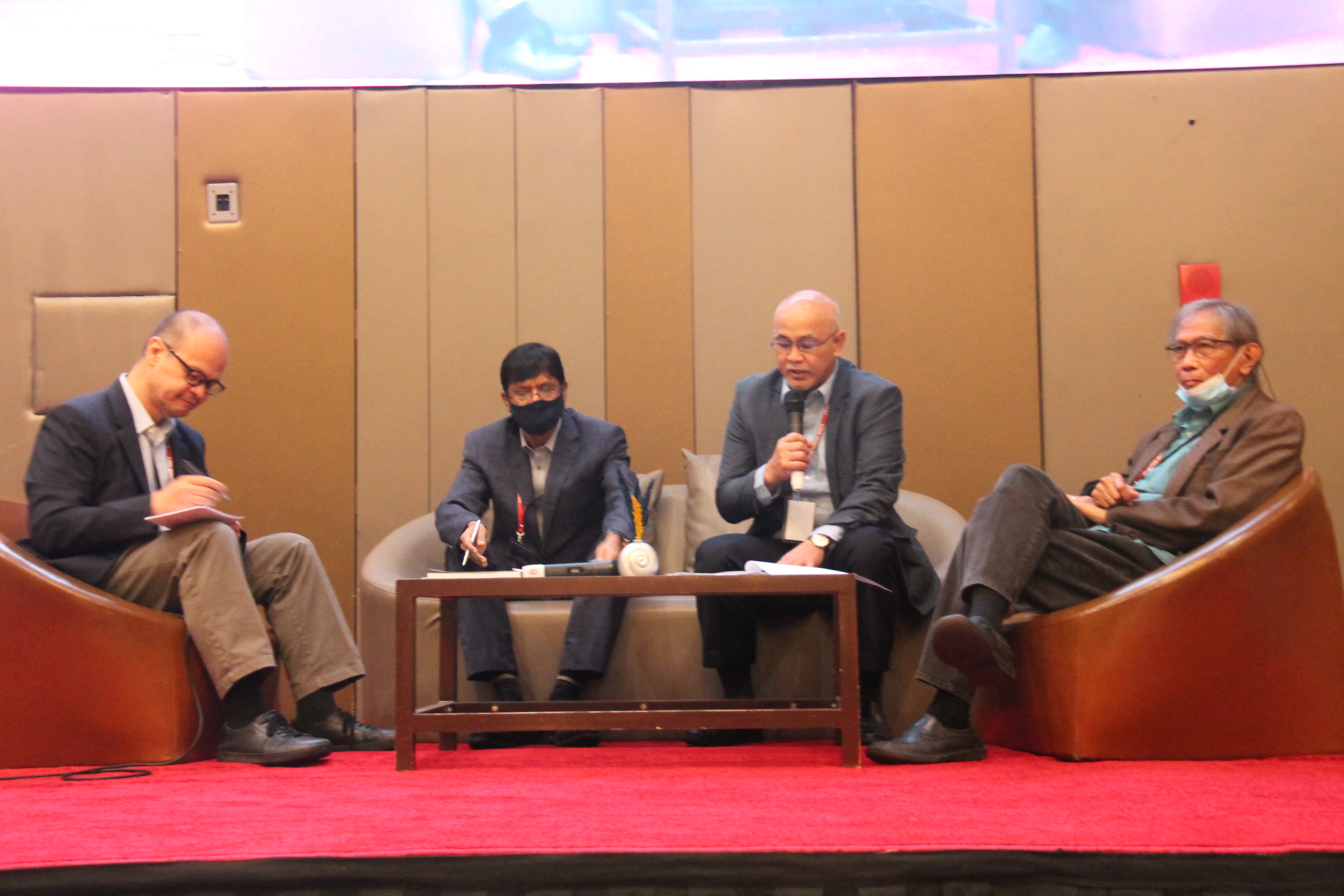 How can the Philippines develop a long-term development strategy that is sustainable, equitable, and less vulnerable to natural and social disruptions as it moves forward in the post-pandemic world? This was the question that the Philippine Economic Society (PES) sought to answer as it held its Annual Meeting and Conference on 9-11 November 2022 in a hybrid format.

This year's PES Conference, which also celebrated the organization's 60th anniversary, tackled the theme, “From Bouncing Back to Leaping Forward Towards a Future Ready Philippines.” Speakers in eight plenary sessions and 26 parallel sessions highlighted the importance of comprehensive responses for a dynamic and inclusive society as the country continues to move into the 21st century.

The first day of the conference was held at the Novotel Manila Araneta City, Quezon City, with all plenary sessions available for virtual streaming via Zoom. Professor Dani Rodrik, President of the International Economic Association and Professor of International Political Economy at the Harvard Kennedy School, delivered the keynote address, which highlighted new economic models vis-à-vis the challenges of intensified geopolitical competition, de-industrialization, climate transition, and post-pandemic aftermath.

Prof. Rodrik’s presentation was followed by a panel discussion on what policies and programs are necessary to meet the challenges in the coming decade and beyond. This panel featured Usec. Joseph Capuno of the National Economic and Development Authority (NEDA), National Scientist Dr. Raul Fabella of the University of the Philippines School of Economics, and Resident Representative Dr. Selva Ramachandran of the United Nations Development Programme Philippines.

The second plenary session, organized by NEDA, focused on the importance of strengthening the culture of planning by tackling the process of creating the country’s economic blueprint, the Philippine Development Plan. This is in line with the theme of Economic and Financial Literacy (EFL) Week 2022, “ISAPLANO: Bagong Philippine Development Plan para sa Patuloy na Pagsulong,” which was celebrated on 7-11 November 2022. This session featured presentations by Usec. Capuno, Dr. Jefferson Arapoc of the University of the Philippines Los Baños, and former Public Works Secretary Rogelio Singson of the Management Association of the Philippines.

The NEDA plenary session was followed by a plenary session organized by the Philippine Competition Commission (PCC), delving on the benefits and challenges of green competition policy. The main presenter was Dr. James Roumasset of the University of Hawai’i, while the panel of reactors included Atty. Marc Waha of Norton Rose Fulbright and Commissioner Johannes Benjamin Bernabe of the PCC.

The next plenary session, sponsored by the Friedrich Naumann Foundation (FNF), featured a research presentation on the prospects of reintegration efforts for OFWs during the pandemic and under a new government. The research by the Ateneo Center for Economic Research Development was presented by Dr. Jeremaiah M. Opiniano of the University of Santo Tomas, with reactions from Asec. Venecio Legaspi of the Department of Migrant Workers and Ms. Sofia Atanacio of the FNF Philippines.

The last plenary session for the first day of the conference was organized by the De La Salle University School of Economics, featuring a presentation on the future of human capital and skills in the post-pandemic economy. The distinguished speaker was Nobel laureate Dr. James Heckman of the University of Chicago.

Before ending the first day of the conference, the PES paid tribute to one of its founding members and original incorporators, Dr. Sixto Kalaw Roxas, through a video tribute and presentation of a plaque of appreciation, received by Dr. Roxas’ grandson, Mr. Manuel Andres Roxas.

The second and third days of the conference featured 26 parallel virtual sessions that covered a wide range of economic concerns, including agriculture, trade, finance and banking, digital economies and competition, poverty and inequality, macroeconomic modelling, economics of disaster, public policy and governance, education and human capital formation, health, among others.

In the afternoon of the third day, the PES organized a virtual plenary session on addressing the social insurance needs of the Filipino population, featuring a panel which consisted of Marikina City Representative Stella Luz Quimbo; Dr. Israel Francis Pargas, Senior Vice President of the Philippine Health Insurance Corporation; Mr. Sem Cordial, Manager at the Philippine Crop Insurance Corporation; and Mr. Jun Jay Perez, Executive Director of the Rimansi Organization for Asia and the Pacific. This session was in celebration of the EFL Week 2022.

In total, the three-day conference was attended by more than 400 participants, on-site and online combined, coming from the different parts of the country and even abroad.