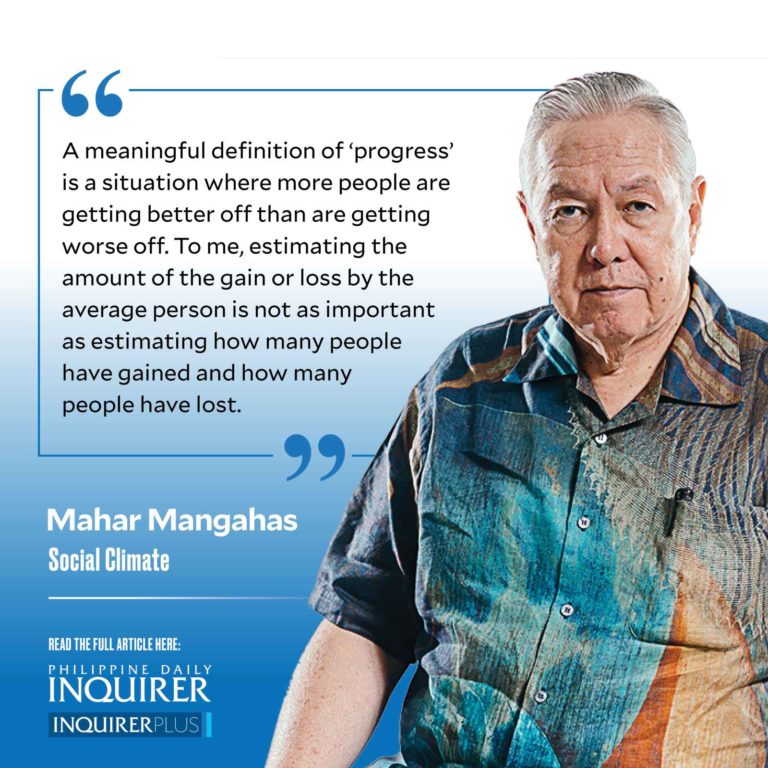 There’s a lot of crowing, especially from the banking profession, about the latest report that the quarterly gross national product (GNP) grew by over 7 percent from last year. The new figures are nice to see, but they don’t mean one can already relax.

Recovery of aggregate production to pre-pandemic times requires not only achieving the GNP of 2019 but also coping with the population growth—about 1.3 percent per year—since then. That would mean two more quarters, perhaps, of 7-point GNP growth.

I think that the sharing of the growth is just as important as the size of the growth itself. A meaningful definition of “progress” is a situation where more people are getting better off than are getting worse off. To me, estimating the amount of the gain or loss by the average person is not as important as estimating how many people have gained and how many people have lost.

In my piece, “Count people, not money” (9/24/22), I said: “Gainers need to outnumber Losers again, like they did just before the pandemic. … Would you believe that, in 145 surveys from 1983 to the present, while there was almost always positive growth in real (i.e., corrected for inflation) gross national product per person, only 21 of those surveys found more Gainers than Losers? This is the clearest proof against the trickle-down theory of economic growth.”

The Consumer Expectations Survey (CES) has quarterly data on gainers and losers that could be used in economic planning. The CES is a probability-based national survey of households, paid for by the Bangko Sentral ng Pilipinas (BSP), for quarterly implementation by the Philippine Statistics Authority.

The CES asks its respondents whether their “economic condition,” “family financial situation,” and “family income” have gotten better, gotten worse, or stayed the same compared to a year ago. It also asks respondents to compare the coming year with their situation today. The CES has been regularly conducted and published for several years, also using net positive/negative scores in presenting its findings.

At a plenary session of the Philippine Economic Society’s annual conference last week (11/9/2022), the National Economic and Development Authority sponsored a panel on development planning for 2023-2028. Undersecretary Joseph Capuno (subbing for secretary Arsenio Balisacan who was at a Senate hearing) spoke for Neda. In the Q&A period, I spoke up to recommend that such planning incorporate the gainers-losers concept, citing the availability of pertinent CES data. A BSP participant confirmed that data from CES and the SWS surveys of Gainers/Losers and Optimists/Pessimists tally over time, by area, and by education. The reaction of Capuno and comments from the floor all seemed positive.